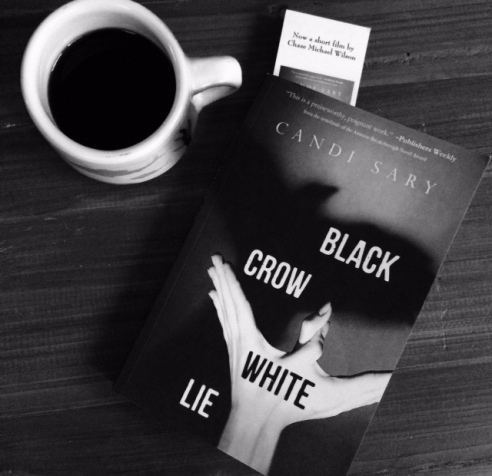 When is it okay to tell a lie? We’ve all done it. In the best scenario we intended to spare someone’s feelings, to give encouragement when the truth would only hurt. Of course we tell the lie believing that the truth will never be revealed, not even a chance.

Candi Sary’s novel, Black Crow White Lie tells the story of Carson Calley, a boy with healing powers who one day learns the truth, a truth that causes him to question all he thought he was or could be.

Carson has spent his young life living in shabby  motels with his mostly absent alcoholic mother Juliette Bravo. Left alone he finds friendship and support on the streets of Hollywood. While he is cautious about sharing stories of his magical powers, the story of his beginning is a source of great pride; he recounts it eagerly to new found friends, Faris, Casper, and even Rose. Once he learns the truth he is paralyzed by disappointment. Why would his mother lie?

Sary skillfully attends to every detail, accurately depicting the streets of Hollywood and its cast of characters, and so perfectly articulating the feelings and emotions of a thirteen year old boy. Sary captures his spirit in her writing, his voice is loud and clear. Authentic and without excuses even her least likable characters evoke compassion from the reader, I found empathy instead of anger for Juliette.

A week after finishing the book, I find myself wondering what Carson might be doing today or three years from now. . . .  I am hoping for a sequel.

For me this novel is a story about the family we make and the life story we create to give meaning and purpose to our lives. And to remember . . . regardless of what we are told, we decide who we are, and we decide what we will become.

I encourage you to follow the link below to read more about his wonderful book and one of my favorite authors, Candi Sary.