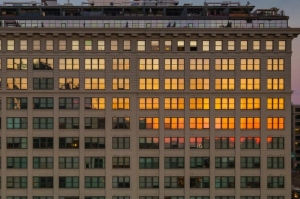 The sun shines on a beautiful summer afternoon. We sit at a small café table, across from one another, leaning in and sharing lunch. He shows me a picture on his phone, embedded in a text from his daughter, a photograph of what appears to be an office or warehouse building, the sunset reflecting in its windows.  He says, looks like just a building, right? Look here. He points to two tiny words beneath the photograph, he reads them, Golden Windows. And then he tells me a story . . .  this is how I remember it.

When my girls were little, I would tell them the story of the Golden Windows. Do you know it? I shake my head no, and listen. A little boy lives in a village, in a modest home. His family is poor and he works long days laboring in his family’s fields. As he works all day, the boy looks to a village on a faraway hill. All of the homes in this village have golden windows. He dreams of living in the village, so rich the windows are gold. He imagines streets paved in gold. Every day, as he works, he looks to the hill, to the village and envies the people who live in their homes with golden windows. One day, the boy’s father tells him he may have the day off, the boy decides to journey to the village. He begins to walk at sunrise. He walks for hours until he finally arrives at the village, but he cannot find the homes with golden windows. Dirty streets and ordinary homes, surely he has lost his way. Discouraged and confused, he ventures home as the sun begins to set.  Before he leaves, he sees a little girl and inquires about the wealthy village and the homes with golden windows. Perhaps she knows the way. Happy and excited she tells the boy to follow her. She points to a valley down below, her face beams. To his surprise, he sees a village, his village, and all of the homes with golden windows.

I smile as his voice trails off, I love the story, the way he tells it, how he loves his girls and loves being a dad. But mostly I love him. He excuses himself for a moment, but not before quickly stealing a kiss. I sit alone with my thoughts, confused by the mixed messages of the last few months. He makes no attempt to see me. The time we spend together is initiated by only me. And yet, when we are together, he is attentive, tells me he loves me and is happy to have me back in his life. But somehow I know in my heart . . .  I am not what he wants. I know it, but I cannot stop.

In the weeks that follow, my doubt grows. I lose my appetite. I lose my nerve. I lose myself. I’m driving along the coast, I see an image. I stop to take a picture, but instead I send this text . . .

So . . . I’m driving south on PCH this evening and the sun is setting behind me. Ahead of me and to the left they appear like magic . . . Golden windows. I smile 🙂. I consider taking a picture but it feels like I’m stealing someone’s precious memory so I don’t do it. Instead I allow my heart to be warmed by your sharing of the story with me. One day when he’s old enough to understand, I’ll share the story with Luca. Xoxoxo

Through summer, fall, winter and now as spring approaches . . . golden windows have visited me more times than I can count. I want to ignore them, but I cannot untell a story that has been told. I cannot unlove someone I love. Instead, I find new meaning in this story, meaning that helps me move on . . .

The golden windows remind me that all I am, all that I possess in my mind, body and spirit, is all I need. No traveling to the land of shiny new things, only to find it is not shiny at all. I know that now.

The golden windows are here in my own home, in my own heart. This is my story to tell.